Since the mid-nineteenth century, the Republic has been Plato’s most famous and widely read dialogue.  As in most other Platonic dialogues the main character is Socrates.  It is generally accepted that the Republic belongs to the dialogues of Plato’s middle period.  In Plato’s early dialogues, Socrates refutes the accounts of his interlocutors and the discussion ends with no satisfactory answer to the matter investigated.  In the Republic however, we encounter Socrates developing a position on justice and its relation to eudaimonia (happiness).  He provides a long and complicated, but unified argument, in defense of the just life and its necessary connection to the happy life.

The dialogue explores two central questions.  The first question is “what is justice?”  Socrates addresses this question both in terms of political communities and in terms of the individual person or soul.  He does this to address the second and driving question of the dialogue: “is the just person happier than the unjust person?” or “what is the relation of justice to happiness?” Given the two central questions of the discussion, Plato’s philosophical concerns in the dialogue are ethical and political.  In order to address these two questions, Socrates and his interlocutors construct a just city in speech, the Kallipolis.  They do this in order to explain what justice is and then they proceed to illustrate justice by analogy in the human soul.  On the way to defending the just life, Socrates considers a tremendous variety of subjects such as several rival theories of justice, competing views of human happiness, education, the nature and importance of philosophy and philosophers, knowledge, the structure of reality, the Forms, the virtues and vices, good and bad souls, good and bad political regimes, the family, the role of women in society, the role of art in society, and even the afterlife.  This wide scope of the dialogue presents various interpretative difficulties and has resulted in thousands of scholarly works.  In order to attempt to understand the dialogue’s argument as a whole one is required to grapple with these subjects. 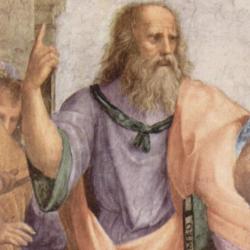