Selves placed, they did not know how or why? There was hardly any political life in ancient India, such as we know it from the Vedas, and in con sequence neither political strife nor municipal ambition. Neither art nor science existed as yet, to call forth the energies of this highly gifted race. While we, overwhelmed with newspapers, with parliamentary reports, with daily discoveries and discussions, with new novels and time-killing social functions, have hardly any leisure left to dwell on metaphysical and religious problems, these problems formed almost the only subject on which the old inhabitants of India could spend their intellectual energies.

Life in a forest was no impossibility in the warm climate of India, and in the absence of the most ordinary means of communication, what was there to do for the members of the small settlements dotted over the country, but to give expression to that wonder at the world which is the beginning of all philosophy Literary ambition could hardly exist during a period when even the art of writing was not yet known, and when there was no literature except what could be spread and handed down by memory, developed to an extra ordinary and almost incredible extent under a care fully elaborated discipline.

But at a time when people could not yet think of public applause or private gain, they thought all the more of truth; and hence the perfectly independent and honest character of most of their philosophy. 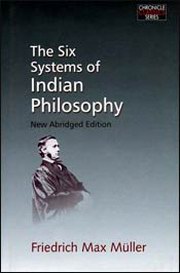