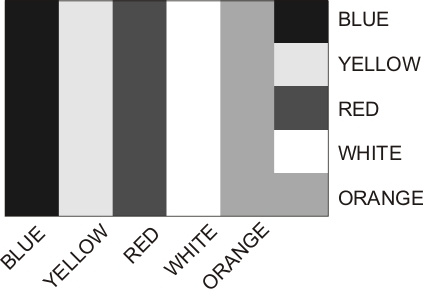 The idea originated in a gathering of members of Theosophical Society in Sri Lanka (then Ceylon). There is some confusion as to whether it was in February 1885 or 1886 because Olcott apparently described events of both years in the same chapter. Col. Olcott in his memoirs Old Diary Leaves, Vol. III, 1883-1887, (Chennai: TPH, 1904 & 1972, pp. 363-4) wrote:

It was at this time that our Colombo colleagues had the happy thought of devising a flag which could be adopted by all Buddhist nations as the universal symbol of their faith, thus serving the same purpose as that of the cross does for all Christians. . . . Our Colombo brothers had hit upon the quite original and unique idea of blending in the flag the six colors alleged to have been exhibited in the aura of the Buddha, viz., sapphire-blue, golden-yellow, crimson, white, scarlet, and a hue composed of the others blended. The adoption of this model avoided all possible causes of dispute among Buddhists, as all, without distinction, accept the same tradition as to the Buddha’s personal appearance and that of his aura: moreover, the flag would have no political meaning whatever, but be strictly religious. As the Colombo Committee had sketched the flag, it was of the inconvenient shape of a ship’s long, streaming pennant, which would be quite unsuitable for carrying in processions or fixing in rooms. My suggestion that it should be made of the usual shape and size of national flags was adopted, and when we had had a sample made, it was unanimously approved of. . . . From Ceylon it has since found its way through the Buddhist world.

White: Purity that leads to liberation