Much of our understanding of Gnosticism comes from a Christian perspective which may be conditioned because the Gnostics were branded as heretics by Christianity and condemned. Irenaeus, a Greek and early Church father in the late second century, famously wrote Adversus Haeresus (Against Heresies) attacking Gnosticism.

In modern times, with the discovery of fourth-century manuscripts sealed in clay jars near Nag Hammadi, Egypt has allowed the first-hand study of Gnostic texts. The full Nag Hammadi library was published in English in 1977. This helped build a better understanding of Gnosticism, although there is no consensus on the subject. The writing in these codices is believed to be from the first or second century and comprises 52 mostly Gnostic tractates; they also include three works belonging to the Corpus Hermeticum and a partial translation of Plato's Republic. The codices are currently in the Coptic Museum in Cairo.

American Religious Historian, Elaine Pagels, cites Wilhelm Bousset, who traces Gnosticism to ancient Babylonian sources, as declaring that “Gnosticism is, first of all, a pre-Christian movement which has its roots in itself. It is therefore understood … in its own terms, and not as an offshoot or by-product of the Christian religion.”   She elsewhere suggests, as do some theosophists, that Hindu or Buddhist traditions could have influenced Gnosticism. Most authorities agree that much of the Gnostic teaching of the Aeons and the Demiurge comes from the Zoroastrian philosophy which the Jews learnt during their captivity in Babylonia. Some non-orthodox Jewish sects, such as the Samaritans, seem to have been gnostic in character.

THE MEANING OF GNOSIS

Unlike modern English, ancient Greek discerned between different forms of knowing such as propositional knowledge, indicative of knowledge acquired indirectly through the reports of others or otherwise by inference ("I know of George Bush" or "I know Berlin is in Germany") and knowledge acquired by direct experience ("I know George Bush personally" or "I know Berlin, having visited it"). Gnosis refers to knowledge of the second kind. In a religious context, to be 'Gnostic' should be understood not as being reliant on knowledge in a general sense, but as being especially receptive to mystical or esoteric experiences of direct participation with the Divine. In most Gnostic systems the sufficient cause of salvation is this 'knowledge of' or 'acquaintance with' the Divine. This is commonly associated with a process of inward 'knowing' or self-exploration. However, the term 'gnostic' also had precedent usage in several ancient philosophical traditions. The greatest authorities all seem to agree that the Kabala is not older than Gnosticism, but both probably spring from the contact of Judaism with the religious beliefs of further East (India) while Essenism (the Essenes) especially furnished a soil favourable to the growth of Gnosticism, the essential evil of matter being a doctrine common to both.   Its Greek and Egyptian origins were recognised and developed by the Neo-Platonists, especially their first exponent, Philo Judaeus who wrote about 20-30 AD, before the better-known Gnostics, like Valentinus, had formulated their Gnosticism.

H.P. Blavatsky made the following comment: “The Church of Rome was Gnostic until the beginning and even the middle of the second century; Marcion, the famous Gnostic, did not separate from it until the year 136, and Tatian left it till later. And why did they leave it? Because they had become heretics, the Church pretends; but the history of these cults contributed by esoteric manuscripts gives us an entirely different version. These famous Gnostics, they tell us, separated themselves from the Church because they could not agree to accept a Christ made flesh, and thus began the process of realising the Christ-principle. It was then also that the metaphysical allegory experienced its first transformation – that allegory which was the fundamental doctrine of all the Gnostic fraternities.”  Gnostics viewed Christ as an enlightened state of consciousness that we can all experience. The Gnostics considered themselves Christians, but pre-Christian traditions on which many of their teachings were based brought them into conflict with growing Christian orthodoxy. The importance they attached to direct mystical knowledge of the Godhead (Gnosis) became a further cause of conflict and from the second century AD they were increasingly branded as heretics and persecuted by the evolving church.

Jewish Gnostics were divided into various fraternities, such as: Essenes, Therapeuts, Nazarenes or Nazars (Jesus of Nazareth). H.P. Blavatsky writes: “James, the Lord’s brother, head of the Church of Jerusalem, was a Gnostic to his finger-tips, an ascetic of the old Biblical type, i.e., a Nazar dedicated to asceticism from his birth. He was such a one as Jesus is represented to be in legends or pictures and such as are all the Brother-Adepts of every country; from the yogi-fakir of India to the greatest Mahâtmans among the Initiates of the Himâlayas.”

THE LANGUAGE OF THE GNOSTICS

Gnostic Records contained the epitome of the chief scenes enacted during the mysteries of Initiation since the memory of man, though even that was given out invariably under the garb of semi-allegory. But ancient Tanaïm, Initiates from whom the wisdom of the Kabala (oral tradition) was obtained by the later Talmudists, had in their possession secrets of the mystery-language, and it is in this language that the Gospels were written.  Thus while the three Synoptics display a combination of the pagan Greek and Jewish symbologies, the Book of Revelation is written in the mystery language of the Tanaïm – the relic of Egyptian and Chaldean wisdom – and St John’s Gospel is purely Gnostic. He alone who has mastered the esoteric cypher of antiquity – the secret meaning of the numerals, a common property at one time of all nations – has full proof of the genius which was displayed in the blending of the purely Egypto-Jewish Old Testament allegories and names, and those of the pagan-Greek Gnostics, the most refined of all the mystics of that day.

To conclude this glimpse into Gnosticism, more can be found in lesser-known material, such as sacred texts of over 2000 years ago and early Christian writings. Of particular are The Secret Teachings of Jesus and his travels after the crucifixion, as well as research into the Essenes of whom Jesus was a member; some accounts suggest he was attempting to awaken an age-old sect which had fallen into tradition, leaving behind its true mystical beginnings. We also find modern-day books like Holy Blood, Holy Grail by Baigent, Lincoln and Leigh and Dan Brown’s The Da Vinci Code bringing insights gained from Gnostic origins of Christianity, portraying amongst other things, the proposition that Mary Magdalene was the most learned disciple of Jesus and also his wife – something hard for male-oriented Christianity to accept but the Gnostics did not discriminate by gender. Prior to the discovery at Nag Hammadi, only the following texts were available to students of Gnosticism: Works preserved by the Church, such as: Acts of Thomas (Especially The Hymn of the Pearl and The Hymn of the Robe of Glory) The Acts of John (Especially The Hymn of Jesus); The Askew Codex (British Museum, bought in 1784): Pistis Sophia: Books of the Saviour; The Bruce Codex (discovered by James Bruce): The Gnosis of the Invisible God or The Books of Jeu, The Untitled Apocalypse or The Gnosis of the Light; The Berlin Codex or The Akhmim Codex (found in Akhmim, Egypt): The Gospel of Mary, The Acts of Peter; The Wisdom of Jesus Christ, Unknown origin: The Secret Gospel of Mark, The Hermetica; Collected Writings of H.P. Blavatsky. 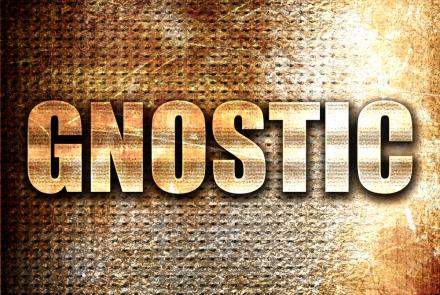