The Science and Esotericism of Occult Chemistry by Bette Stockbauer-Harris

The Science and Esotericism of Occult Chemistry by Bette Stockbauer-Harris

During the past two centuries, both science and religion have experienced revolutionary change. In the sciences, discovery of the properties of the atom have led to theories of light, electricity and magnetism that have produced our modern technology. In religion, new means of communication have facilitated the transfer of occult spiritual knowledge from homes in the remote regions of the world to the public at large. Each has brought a new vision; each has given to humanity an ability to see into a previously unseen world – a world of energies, forces and elemental constituents that all form comprises. One of the most exciting challenges of the coming times will be to correlate the extraordinary accomplishments that have occurred in both fields of inquiry and build a paradigm based on the foremost accomplishments of each.

C. W. LEADBEATER AND ANNIE BESANT
An illustrative example of this confluence can be found in the book Occult Chemistry (OC), by C.W. Leadbeater and Annie Besant, who were early leaders of the Theosophical Society. In 1895, they embarked on a collaboration that produced one of the most groundbreaking (although unrealised at the time) books in the esoteric lexicon, for in it were published results of their psychic viewing of all the earth’s elements at the level of the atom, a feat that still eludes science to this day. Both had undergone intensive training in ‘magnifying clairvoyance,’ an ancient yogic technique known in Sanskrit as anima, and more currently as micro-psi, that claims to allow the practitioner to enter into the world of the very small, including the atomic and subatomic. The skill acquired is not a faculty of magnification, but is described as an ability to enter into a mental state of becoming infinitesimally small. Imaginatively, the viewer, through intense concentration and focused effort, achieves smallness commensurate with the object of investigation. The observer is not in trance, but totally conscious and able to communicate in minute detail what is seen. Mental abilities such as these are called siddhis, and have been practised in the Orient for thousands of years.

During 38 years of research Leadbeater and Besant examined and recorded subatomic properties of 109 elements and isotopes, 29 inorganic and 22 organic compounds and investigated the catalytic process for several compounds. Included in their records were hundreds of drawings of shapes that were visually observed, numerical listings of sub-particles for each element and descriptions of energy movements and fields. The researchers claimed that they could view atomic matter on all seven planes, from the dense physical to the highest etheric plane. They noted that at each successively higher plane the atomic combinations broke down into increasingly simpler arrangements, until at the highest etheric, they determined they were viewing what they described as the ultimate physical atom, the UPA, which they assumed was the simplest constituent of matter. Their UPA closely resembled the atom depicted by Edwin Babbitt on page 102 in The Principles of Light and Color, a heart shaped structure encircled by ten spirillae, three major and seven minor. In attempts to further dissociate the UPA, it disappeared and they assumed it had vanished into the cosmic astral level.

Through their meticulous counting of the UPAs of each individual element they were able to assign largely correct atomic weights to each, in the process predicting some not yet discovered, as well as several isotopes (such as neon-22), elemental combinations not then understood.  They also described atomic motions that were unknown at the time, namely spin (discovered 30 years later), rotational precession (Larmor precession, discovered in 1897) and pulsation (as yet undiscovered). Several scientists were awarded Nobel Prizes for isolating elements these occultists had predicted at an earlier date.

They also described external shapes of the atom when viewed as a totality, and recorded them as comprising differing combinations of seven basic shapes: spike, dumbbell, tetrahedron, cube, octahedron, bars and star. This aspect of their work has no parallel in science, and the amazingly detailed and beautiful drawings in their books are unlike any theoretical models. Leadbeater and Besant considered their work seminal and expected that researchers following in their footsteps would expand upon it. When Occult Chemistry was published it was something of an enigma to both science and esotericism. It had ventured into new fields and utilised an intuitive ‘technology’ that, although familiar in the secluded monasteries of the Himalayas, was still totally unknown in the west.

GEOFFREY HODSON
Another leading theosophical investigator, Geoffrey Hodson, followed up this earlier work, and his viewings have added information that complements the earlier studies. For over 70 years Hodson was an inspiring author and lecturer for the Theosophical Society worldwide, and hoping to verify some of the earlier findings in OC, he undertook a collaboration with Dr David Lyness, a psychiatrist, in New Zealand between 1957 and 1959. Their efforts produced 40 hours of audio recordings which were later transcribed. In 1978, when Hodson was 93 years old, a second series of viewings with New Zealand Theosophical researcher, Murray Stentiford, were also recorded and transcribed. Hodson’s work was different from the earlier investigators, as he was not so attentive to the minutia of particles and energy units, but rather focused on the more global energetic forces, both the overall configurations of atomic structure, and notably, the energy encompassing and surrounding the UPAs. In general his observations verified many of the earlier claims. During sessions, he would often be struck by an immense energetic force coming from the substance, as if he had contacted an original source of power, which he would variously call Divine Source or Divine Mind.

DR STEPHEN PHILLIPS
Dr Stephen Phillips was a graduate student studying physics in the US when he saw a drawing of the hydrogen atom from OC in William Kingsland’s book The Physics of the Secret Doctrine. He was instantly attracted because, as he relates, “I immediately recognised in it the physicist’s model of a proton as a triangular cluster of three particles that he calls ‘quarks.’” After procuring a copy of OC, and by scrutinising the recorded data, he estimated that the likelihood of their findings being based on either luck or chance was practically nil. In 1980 he published his analysis in a book entitled Extra-Sensory Perception of Quarks, a work of investigative insight that is original, thought provoking and meticulously studied in its own right.

Phillips analysed the material by using the constructs of two theoretical models of physics – quantum chromodynamics (QCD) and string theory, both having to do with the subatomic contents and forces within the atomic nucleus. In Phillips’s opinion the hundreds of diagrams in OC depicting various elements display a configuration commensurate with modern models of atomic nuclei, showing the proton and neutron as composed of three quarks held together by flux tubes (of string theory) into a stable electrical arrangement. The nuclear contents are held together by the strong force, the most powerful force known to science. The QCD model was tested and finalised in the late 1960s, over 40 years after the publication of OC. Phillips’s website, http://smphillips.8m.com/, contains extensive discussion of his analytical and interpretive work and offers a free download of his book.

Phillips has also analysed Hodson’s work, finding possible analogy with a concept at the forefront of current physics – the detection of the Higgs field, a presumed universal field of energy that imparts the attribute of mass to all substance. Experiments at the CERN particle collider in Switzerland have drawn international attention and verified a hypothesis first suggested by Peter Higgs in 1964. During viewings in the 1950s, Hodson described seeing a “mist or field” surrounding the UPAs, external to them and in continuous circular motion. Remarkably, his description of the mist as external to the atoms and as displaying a vortex of activity is regarded by Phillips as analogous to scientific models of the Higgs field, specifically to certain energetic movements called Nielsen-Olesen vortices. These vortices are the strings of string theory that hold the quarks confined within the nucleus and according to the Higgs theorem, impart mass to its sub-particles. Hodson’s viewing was recorded five years before Higgs’s first publication and 55 years before its confirmation at CERN. Further discussion can be found at: http://www.smphillips.8m.com/news.html.

Helena Blavatsky was insistent that “Matter is spirit at its lowest point of manifestation and spirit is matter at its highest.” Science and religion are expressions of this duality, one describing the forms and forces of cosmic life, the other seeking to fathom essential cause. It is the wonder of the human mind that enables it to encompass both, to explore the world within its reach, yet continually aspire to greater vision. These far-sighted pioneers of thought have given us a glimpse of the essential unity of truth, demonstrating that knowledge from diverse vantage points can reach confluence and build a more comprehensive paradigm, and by so doing, can elevate the seeker into a realm of still greater illumination.

Bette Stockbauer-Harris has been a student of Theosophy for 35 years. Her present focus of investigation lies in tracing alliance between current scientific theory and the foundational tenets of esotericism. An American citizen with a degree in African Anthropology, Bette and her husband, James Harris, are wood artisans by profession and manage a small conservation programme in Tanzania replanting the threatened species, African black-wood. 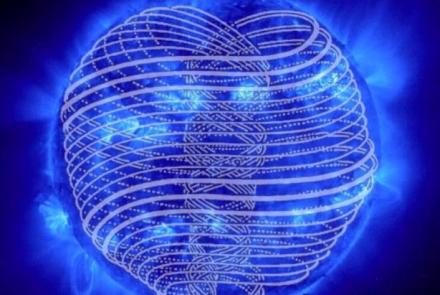