Ancient Egypt: The Light of the World - Gerald Massey

With his earlier two series in Egyptology, Gerald Massey turned existing doctrine on its head to argue that not only had Egypt spawned human civilization, but that Egyptian mythology was the basis for Jewish and Christian beliefs. The culmination of his years at this particular intellectual pursuit, Ancient Egypt: The Light of the World is Massey's crown jewel. In this, the most philosophical (in both tone and concept) of his Egyptological works, Massey, ever the intrepid escort, leads a tour through thousands of years of sociological, cultural, and spiritual development, all the while pointing, with dazzling reason and persuasive prose, to a distant, common, Egyptian origin.

British author GERALD MASSEY (1828-1907) published works of poetry, spiritualism, Shakespearean criticism, and theology, but his best-known works are in the realm of Egyptology, including A Book of the Beginnings and The Natural Genesis.

Download Ancient Egypt: The Light of the World (PDF 5.5Mb) 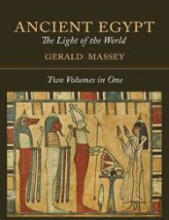