Articles Written by the Masters and Published in The Theosophist

Articles Written by the Masters and Published in The Theosophist

Introduction‘Mary K. Neff (1877-1948), for many years a teacher in the public schools of Ohio, USA. She joined the Theosophical Society in 1908. Three years later she went to Adyar. And then for four years she worked in the Theosophical Publishing House and the Adyar Library. For a time she acted as private secretary to C. W. Leadbeater. Under the inspiration of Dr. Annie Besant she worked for schools in Madanapalle, Benares and Lucknow.While in Lucknow, Miss Neff was organizing secretary of the Women’s Department of the Anti-Tuberculosis League and superintendent of the Lady Student’s Hostel at King George's Medical College. In 1922 Miss Neff went to Australia. At Sydney she assisted Dr. J. J. van der Leeuw in King Arthur’s School.She was for two years Assistant General Secretary of the Australian Section. Then followed two years as national lecturer.At the request of Mr. Jinarājadāsa, the then Vice-President of The Theosophical Society, Miss Neff returned to Adyar in 1927 to arrange and catalogue the archives of The Theosophical Society. This mountainous and important task occupied two years and made her thoroughly conversant with the history of the Society. When C. W. Leadbeater left Australia to reside at Adyar in 1929, Miss Neff again served as his private secretary.Miss Neff was the author of numerous articles in THE THEOSOPHIST and other theosophical journals.Among her published books were The “Brothers” of Madame Blavatsky, A Guide to Adyar and Personal Memoirs of H. P. Blavatsky. Her book, How Theosophy Came to Australia, published in 1943, won for her the high honor of the Subba Row Medal.’ (Source: The American Theosophist, January 1949, p. 9.)One of the articles she wrote, for the April 1929 issue of The Theosophist (pp.72-77), is entitled ‘The Masters as Journalists’. In it she presented some brief examples of texts written by the Masters and published in that journal. She wrote in that article: ‘It was a most delightful discovery to me to learn that several of the Masters were contributors to the early volumes of THE THEOSOPHIST, and I should like to share the delight with readers of that journal by placing one of these contributions before them. THETHEOSOPHIST of 1882, for instance, contains at least three such articles...’ The articles were ‘A Mental Puzzle’, ‘What is Matter and what is Force’ and ‘Harmonics of Smell’.

But it was in a series of articles, contributed to The Theosophist (October-December 1929), entitled ‘The Hidden Side of “The Theosophist”’, that she presented a number of others articles which were also contributed by the Masters. The article is enriched by Miss Neff’s thorough knowledge of Theosophical history. We reproduce that article on a separate link in www.cwlworld.info.We include below a draft, found among Miss Neff’s papers in the Adyar Archives many years ago, which presents a more comprehensive list of articles from the pen of the Mahatmas and published in The Theosophist. As the draft mentions some of the volumes of HPB’s Collected Writings which were published after Miss Neff’s death, it becomes clear that the draft, although not written by her, expressed her own research. After the draft we include the full text of the original articles published in that journal.The Theosophical Society owes Miss Mary K. Neff a debt of profound gratitude for her many years of in-depth research and writing on the Society’s extraordinary history.Compiler 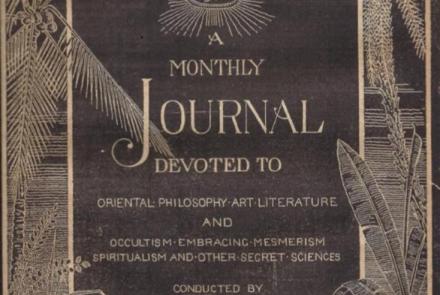