This ebook is a compliation of articles published in The Theosophical Path between April 1932 and 1936.

In the introduction it says they were a series of chapters written by an old and valued contributor, Philip A. Malpas, M. A., on that extraordinary and greatly misunderstood man known to the world as the Count di Cagliostro. This series is the outcome of many years of study and exhaustive research, and we believe our readers will find it of absorbing interest, both as an unprejudiced record of the efforts of a great Theosophist to bring forward some knowledge of the Ancient Wisdom of the Orient at a critical period in Western Europe, and as a study of a noble life devoted to the service of humanity.

In the study of world-history there is a strange fascination in the tragic accounts of the many martyrs who have been slandered and persecuted with almost incredible ferocity, because they tried to break down conventional barriers and help their fellow-men to higher thinking and to the practice of Brotherhood, regardless of creed or nationality.

Not the least interesting of these is Cagliostro, who first appears in authentic history in London in 1776, and vanishes from public knowledge in the Papal prison of San Leo in Italy, in 1795. During his meteoric career In those nineteen years we see him reach dazzling heights of glory, wealth, and fame. He becomes a familiar and honored figure in the highest and most intelligent society in Europe. Among many other activities, he establishes innumerable Lodges of 'Egyptian Masonry' with the avowed object of helping humanity to greater freedom in thought and action, and also of purifying the secret societies which were so numerous in his time. He is a friend of the greatest and noblest thinkers, such as Goethe and Schiller; he performs many curious psychological experiments, marvelous in the eyes of the ignorant, but now slowly becoming recognised as natural facts governed by law and having their proper place in the economy of the Cosmos; he cures multitudes of sufferers of the most dangerous diseases, and after many strange adventures in various countries he is dragged into the amazing Diamond Necklace Trial in Paris, from which, in spite of every possible effort to ruin him, he is released without a stain upon his character. Though beloved and revered by thousands, an enthusiast for humanity, he is savagely persecuted by bigots and admittedly depraved villains, and is finally plunged into the horrors of a subterranean dungeon for no other crime than that of being a Freemason. It is no wonder that so strange and tragical a story has never ceased to be a subject of absorbing interest. 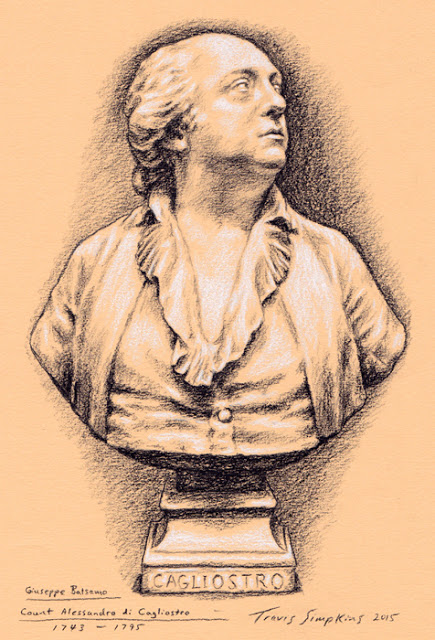