Civilisation's Deadlocks and the Keys

Civilisation's Deadlocks and the Keys

In 1909 I delivered in this hall a series of lectures entitled " The Changing World." In those lectures I tried to show that in all the great departments of human life the old methods were showing signs of being outworn: that whether you looked at Religion, at Science, at Art, or at the organisation of Society in the Western World, you found with all of them that we were coming to a point where continuance along the same road was practically impossible.

I gave at that time five lectures, as I am giving now; and I want, if I can, to show you now the possibilities that are opening before us in these different lines of human life and of human activity. I am going to speak to you, after the introductory lecture of to-night, on those great subjects that I dealt with before, but with a differen~:e, Fifteen years ago I spoke of the deadlocks but not of the keys that might open the doors that were shut apparently against the onward march of humanity. This time, after asking you to shortly survey with me the field that we shall study in the following lectures, I am proposing to speak on the keys to each of the four great subjects.

Download the PDF of the book Civilisation's Deadlocks and the Keys 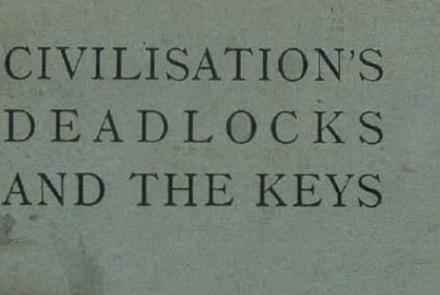