The Dhammapada - translated by John Richards

The Dhammapada - translated by John Richards

The Dhammapada is an anthology of verses, belonging to the part of the Theravada Pali Canon of scriptures known as the Khuddaka Nikaya, and consists of 423 verses.

Something like a quarter of the verses are to be found in other parts of the Pali Tipitaka, particularly in the other verse parts of the Khuddaka Nikaya such as the Sutta Nipata and the Thera- and Theri-gatha.

The Dhammapada is probably the most popular book of the Pali Canon, with the possible exception of the Satipatthana Sutta, or the Sutta on the Turning of the Wheel of the Law (Dhamma-cakka-ppavattana Sutta). It is certainly the most frequently translated portion.

There are a number of Mahayana works to which it appears to be closely related. There are in the Chinese scriptures 4 works resembling the Dhammapada. The nearest is the Fa Chu Ching, which was translated in AD 223. (translated by Beal), the first part of which seems to be a direct translation of the Pali Dhammapada. (It is intriguing to wonder how a Pali work found its way to China in those early years. The Introduction merely says it was brought from India and was translated as a joint venture by a Chinese and an Indian.) One small piece of evidence that the Chinese is a translation from the Pali is found in the verse corrsponding to the Pali verse 146. The Chinese here reads "remembering the everlasting burnings", having mistaken the word "sati", (which in the Pali is the locative case of the present participle of a verb for "being") for the noun "sati", memory, or recollection. The later part of the Chinese appears to be an anthology in its own right.

There is also a Dhammapada in the Gandhari language (edited and translated by Brough), but although it contains at least half of its verses in common with the Pali Dhammapada, the order and distribution make it fairly certain that there is no direct link between the two works.

There is another work in Sanskrit called the Udanavarga, which also has a large number of verses in common with the Dhammapada, but again seems to be a completely independent compilation. It is often most instructive though to compare some of the verses in these different collections. Sometimes they are effectively identical, but at other times they are radically different. It would be a rash person, in our present state of scholarship, who ventured to assert which is the original.

It is an anthology, not a Sutra, for a Sutra is always in the form of a Discourse of the Buddha. The name itself is a pun on the idea of "The Path of the Dhamma (Teaching)" and "Dhamma Stanzas". As a Buddhist monk in Burma I learned the whole text off by heart in Pali, and used to recite a chapter each day to myself while out on the alms round.

Like most anthologies of verses, the Dhammapada is very uneven. Some verses are both profound and deeply poetic. Others are awkward, and little more than a list of technical terms. The overall effect of the Dhammapada however is undoubtedly of high moral and spiritual earnestness, and a typically Buddhist gentle persuasiveness. It would be hard to point to a poetic book of a similar length in world religious literature of a correspondingly sustained level. -

Based on the English translation by Harischandra Kaviratna 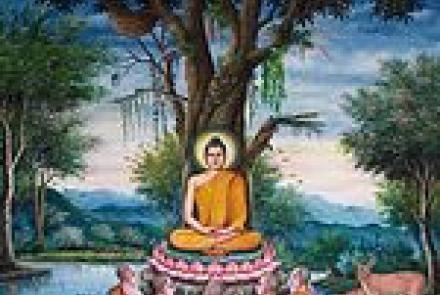