The Secret Path by Paul Brunton

The Secret Path by Paul Brunton

The Secret Path describes a practical way for everyday working people to unlock the powers of the Overself. The Overself, as described by Paul Brunton (PB), is “the God within us” of whom we can become aware during meditation and in life.

Paul Brunton (PB) is the person who introduced the Western world to the Indian guru Ramana Maharshi.  Much of what PB has to say in The Secret Path can ultimately be traced back to Ramana’s teachings on self-enquiry.

PB spent most of his life on a spiritual quest looking for answers to the important questions of  life. He extensively traveled, living on every continent with a focus on India and Egypt, and was the author of 28 books. Before he took his second journey to the East PB had a vision of his own guru, Ramana, which caused PB to delay his journey in order to write The Secret Path in only four short weeks in 1934.

The book starts with some interesting discussions about PB’s background and about the important questions of spiritual life. It does not promise to give you a simple answer to these questions (such answers cannot be expressed in words … they can only be known by direct experience) but it does promise to provide an efficient path towards those answers so that you can find them yourself.

PB claims to have found enlightenment so, if his claim is true, this secret path is well worth studying. I personally found the directions to be much clearer, more complete and simpler than most others. And, they are generally consistent with ideas from great seers such as Jesus, Buddha and Emerson which adds to their veracity in my opinion.

PB speaks from a Western point of view and claims that there is one ultimate source or Overself. He claims that seers such as Jesus and Buddha are all talking about the same thing, that is, becoming one with the Overself.  The differences have to do with their different cultures and the different approaches they are taking to the same destination.

Basically he says the personal self (personality) is provided the life energy which holds it together and is provided its very existence by the Overself quietly residing behind it. However, the personal self has become so entranced by this world’s external sensations that it has lost awareness of its true source. The Secret Path is a practical way to help the personal self see the spiritual, versus the material, realities of life. 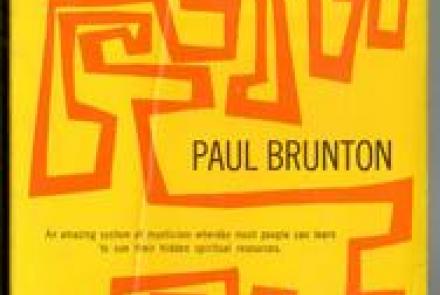