The Globes are not phases of each other, they are evolutionary stages of consciousness

The Globes are not phases of each other, they are evolutionary stages of consciousness

Their nature can be apprehended only when examined from a high metaphysical standpoint.

In February Path the subject of the coadunition but non-consubstantiality of the seven globes of the Earth-chain was opened up slightly and discussed in view of certain expressions from the Adepts themselves on the same matter. Since then questions and doubts have arisen, as it seems that — as was suspected — the fundamental principles underlying this doctrine have not been clearly defined in the minds of all.

And, indeed, before such clear definition is arrived at most if not all of the naturalistic and materialistic doctrines and modes of thought of the day will have to be abandoned. The true theory of the companion globes of our earth is one which cannot be fully comprehended if we are influenced, as many are, by the education which for centuries has been imposed upon us. When the adepts say that these doctrines must be examined from a metaphysical standpoint, the nineteenth century person thinks that therefore it must be so vague and unreal as not to constitute an inclusion of facts, since “facts” are hard and visible things, so to say.

The first question, coming from one who grasps to a great extent the theory broached in the paragraph from the Master’s pen quoted in The Secret Doctrine, is whether we will be able to see but one globe at a time as we change our centre of consciousness?

That is to say, seeing that we now can perceive the earth with the eye and none of the other companions, does it follow from this that, when the race ceases to function on the earth and has taken up evolution on the next globe in order, we shall see then but that globe and none of the others of the chain among which will then be included this earth? It by no means follows that we then shall be able to see but one, but to what extent our then vision will be stretched or how many other globes we shall be able to see has not been given out publicly by the Masters, and it is held that alone in the keeping of the Lodge is the knowledge on this detail of the doctrine. We are left therefore to our own deductions, to be drawn from known facts. No very substantial benefit could be derived from exact knowledge about it, as it relates to matters and states of life removed from us inconceivably far both as to time and consciousness.

Nor would a full explanation be comprehended. One of the teachers has written:
You do not seem to realize the tremendous difficulties in the way of imparting even the rudiments of our science to those who have been trained in the familiar methods of (modern science). You do not see that the more you have of the one the less capable you are to instinctively comprehend the other, for a man can only think in his worn grooves, and unless he has the courage to fill up these and make new ones for himself [italics are mine] he must perforce travel on the old lines. . . . Such is unfortunately the inherited and self-acquired grossness of the Western mind, and so greatly have the very phrases expressive of modern thoughts been developed in the line of practical materialism, that it is now next to impossible either for them to comprehend or for us to express in their own languages anything of that delicate, seemingly ideal machinery of the Occult Cosmos. To some little extent that faculty can be acquired by the Europeans through study and editation — but that’s all. And here is the bar which has hitherto prevented a conviction of the Theosophical truths from gaining currency among Western nations; caused Theosophical study to be cast aside as useless and fantastic by Western philosophers.

As implied in the foregoing, the reason for not telling all about it is that it would not be comprehended, and not that the Lodge desires to keep it back from the world. The same difficulty has often been encountered by ordinary clairvoyants who have tried to give an account of the little they know of the “occult cosmos” to hearers whose modes of thought were purely materialistic or tainted by that kind of education. And I have met estimable theosophists who said to me that if they really were convinced that I believed certain things which I hinted to them they would be forced in sadness to conclude I was a most superstitious person meaning of course that their ignorance and inability would constitute my superstition.

But as we now reside in a physical body perfectly visible to us, and as the astral body is sometimes seen by certain persons, it follows most surely that some persons can now see another body or form of matter while functioning in their little earth. The fact that all do not see the astral body only proves that as yet the seeing of it is not normal for the whole human race. And looking at the other side of the matter, we know that sometimes persons escaped temporarily from the physical body and functioning wholly in the astral have been able to see the physical one as it slept in trance. From this we may conclude that when the race has gone to some other centre of consciousness called a globe, it may possibly be able to see another of the companions in the sky. This is made more probable from the fact that the Earth is the lowest or at the turning of the circle, and for that reason it is on its own plane and not in company as to plane with any other one. The others might be two at a time on the one plane and then visible to each other.

The next point raised is that if the article of February is accepted, then it results that we consider the companion globes to be only “phases of the Earth.” The letter from the Master above quoted is pertinent here, for this objection arises solely and wholly from a materialistic education leading the objector to give the first place of importance to the earth, just as if it were not possible to say that earth is a phase of the other globes.

The globes are not in any sense phases of each other, but are “phases of consciousness.” The consciousness alters and we function in another state of matter, in the same place, but not able to see the state of matter we have left. And as now the whole race is bound up by its total form and quality of consciousness, the units of it are compelled to remain in the general state of consciousness until the race progress permits an advance or change to another. In the evolution of the race it develops new senses and instruments for perception, but these proceed along with the changing centre of consciousness, and are not the causes for the latter but are effects due to the operation and force of that inner power of perceiving which at last compels nature to furnish the necessary instrument. When the new instruments are all perfected, then the whole race moves on to another plane altogether.

All this supports and enforces the doctrine of universal brotherhood upon which the Adepts have insisted. For the changing of consciousness as to centre is not for the benefit of the individual, but is permissible and possible when the whole mass of matter of the globe whereon the beings are evolving has been perfected by the efforts and work of the most advanced of the whole number, and that advanced class is man. If it were otherwise, then we should see millions upon millions of selfish souls deserting the planet as soon as they had acquired the necessary new senses, leaving their fellows and the various kingdoms of nature to shift for themselves. But the law and the Lodge will not permit this, but insist that we shall remain until the lower masses of atoms have been far enough educated to be able to go on in a manner not productive of confusion. Here again we trench upon the materialism of the age, which will roar with laughter at the idea of its being possible to educate the atoms.

The doctrine of the interpenetration of the planes of matter lies at the root of clairvoyance, clairaudience, and all such phenomena. Clairvoyance would be an impossibility were it not the fact that what for the ordinary sense is solid and an obstacle to sight is in reality for the other set of senses non-existent, free from solidity, and no obstacle. Otherwise clear seeing is impossible, and the learned doctors are right who say we are all deluded and never did any one see through a solid wall. For while the faculty of imagination is necessary for the training of the power to see through a solid wall, we could not so perceive merely by imagination, since objects must have a medium through which they are to be seen.

This again strikes against materialistic conceptions, for the “objective” usually means that which can be seen and felt. But in the machinery of the “occult cosmos” the objective is constantly changing to the subjective and vice versa, as the centre of consciousness changes. In the trance or clairvoyant state the subjective of the waking man has become the objective. So also in dreams. There, clothed with another body of finer texture, the perceiver finds all the experiences objective as to their circumstances and subjective as to the feelings they produce on the perceiver who registers the sensations. And in precisely similar manner will the race see, feel, and know when it has changed all and begins to function on another globe. 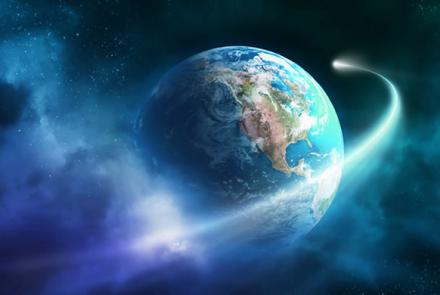