Does your B.T.S. know the meaning of the white and black interlaced triangles, of the Parent Society's seal that it has also adopted? Shall I explain?—the double triangle viewed by the Jewish Kabalists as Solomon's Seal, is, as many of you doubtless know the Sri-antara of the archaic Aryan Temple, the “mystery of Mysteries," a geometrical synthesis of the whole occult doctrine. The two interlaced triangles are the Buddhan-gums of Creation. They contain the " squaring of the circle," the “ Philosophical Stone," the great problems of Life and Death, and—the Mystery of Evil. The chela who can explain this sign from every one of its aspects—is virtually an adept. How is it then that the only one among you, who has come so near to unravelling the mystery is also the only one who got none of her ideas from books? Unconsciously she gives out—to him who has the key—the first syllable of the Ineffable name ! Of course you know that the double triangle—the Satkiri Chakram of Vishuu—or the six-pointed star, is the perfect seven. In all the old Sanskrit works—Vedic and Tantrik—you find the number 6 mentioned more often than 7—this last figure, the central point being implied, for it is the germ of the six and their matrix. It is then thus . . .

—the central point standing for seventh, and the circle, the Mahakdsha—endless space—for the seventh Universal Principle. In one sense, both are viewed as Avalokitesvara, for they are respectively the Macrocosm and the microcosm. The interlaced triangles—the upper pointing one—is Wisdom Concealed, and the downward pointing- one—Wisdom Revealed (in the phenomenal world). The circle indicates the bounding-, circumscribing quality of the All, the Universal Principle which, from any given point expands so as to embrace all things, while embodying the potentiality of every action in the Cosmos. As the point then is the centre round which the circle is traced—they are identical and one, and though from the standpoint of Maya and Avidya—(illusion and ignorance)—one is separated from the other by the manifested triangle, the 3 sides of which represent the three gunas—finite attributes. In symbology the central point is Jivatma (the 7th principle), and hence Avalokitesvara, the Kwan-Shai-yin, the manifested “ Voice " (or Logos), the germ point of manifested activity ;—hence—in the phraseology of the Christian Kabalists "the Son of the Father and Mother," and agreeably to ours—" the Self manifested in Self—Yih-Sin, the “ one form of existence," the child of Dharmakaya (the universally diffused Essence), both male and female. Parabrahm or “ Adi-Buddha " while acting through that germ point outwardly as an active force, reacts from the circumference inwardly as the Supreme but latent Potency. The double triangles symbolize the Great Passive and the Great Active ; the male and female ; Purusha and Prakriti. Each triangle is a Trinity because presenting a triple aspect. The white represents in its straight lines : Gnanam —(Knowledge) ; Gnata—(the Knower) ; and Gnayam—(that which is known). The black—form, colour, and substance, also the creative, preservative, and destructive forces and are mutually correlating, etc., etc. 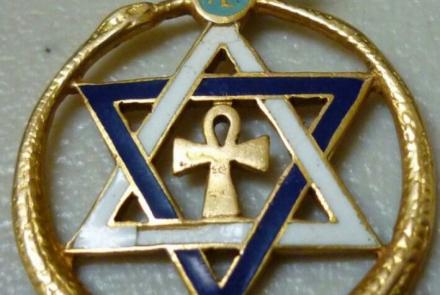