Do not be proud of wealth, people, relations and friends, or youth. All these are snatched by time in the blink of an eye. Giving up this illusory world, know and attain the Supreme.

Do not look at anybody in terms of friend or foe, brother or cousin; do not fritter away your mental energies in thoughts of friendship or enemity. Seeking the Self everywhere, be amiable and equal-minded towards all, treating all alike.

Even after the Truth has been realised, there remains that strong, obstinate impression that one is still an ego - the agent and experiencer. This has to be carefully removed by living in a state of constant identification with the supreme non-dual Self. Full Awakening is the eventual ceasing of all the mental impressions of being an ego.

Reality can be experienced only with the eye of understanding, not just by a scholar

The world, like a dream full of attachments and aversions seems real until the awakening.

As gold purified in a furnace loses its impurities and achieves its own true nature, the mind gets rid of the impurities of the attributes of delusion, attachment and purity through meditation and attains Reality.

Knowing that I am different from the body, I need not neglect the body. It is a vehicle that I use to transact with the world. It is the temple which houses the Pure Self within.

When your last breath arrives, Grammar can do nothing.

To be free from bondage the wise person must practise discrimination between One-Self and the ego-self.

By that alone you will become full of joy, recognising Self as Pure Being, Consciousness and Bliss.

Curb your senses and your mind and see the Lord within your heart.

Just as a stone, a tree, a straw, grain, a mat, a cloth, a pot, and so on, when burned, are reduced to earth (from which they came), so the body and its sense organs, on being burned in the fire of Knowledge, become Knowledge and are absorbed in Brahman, like darkness in the light of the sun.

There is sorrow in finitude. The Self is beyond time, space and objects. It is infinite and hence of the nature of absolute happiness.

Loud speech, profusion of words, and possessing skillfulness in expounding scriptures are merely for the enjoyment of the learned. They do not lead to liberation.

Give up identification with this mass of flesh as well as with what thinks it a mass. Both are intellectual imaginations. Recognise your true self as undifferentiated awareness, unaffected by time, past, present or future, and enter Peace.

From a clear knowledge of the Bhagavad-gita all the goals of human existence become fulfilled. Bhagavad-gita is the manifest quintessence of all the teachings of the Vedic scriptures.

The treasure I have found cannot be described in words, the mind cannot conceive of it.

Like the appearance of silver in mother of pearl, the world seems real until the Self, the underlying reality, is realized.

What is enquiry into the Truth? It is the firm conviction that the Self is real, and all, other than That, is unreal.

But the jiva [living being] is endowed with ego and his knowledge is limited, whereas Ishwar is without ego and is omniscient.

The witness of the three states of consciousness [waking, dream and deep sleep] and of the nature of Existence-Consciousness-Bliss is the Self

All the manifested world of things and beings are projected by imagination upon the substratum which is the Eternal All pervading Vishnu , whose nature is Existence- Intelligence ; just as the different ornaments are all made out of the same gold.

Who but the Atman is capable of removing the bonds of ignorance, passion and self-interested action?

Thus one should know oneself to be of the nature of Existence-Consciousness-Bliss[Sat-Chit-Ananda]. 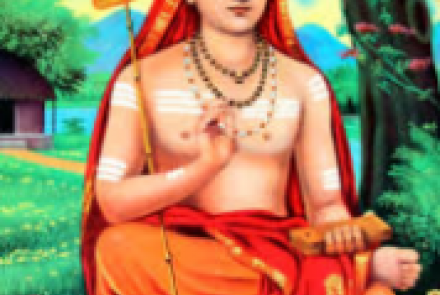