A clean life, an open mind, A pure heart, an eager intellect,

An unveiled spiritual perception, A brotherliness for all,

A readiness to give and receive advice and instruction,

A loyal sense of duty to the Teacher, A willing obedience to the behests of TRUTH,

Once we have placed our confidence in, And believe that Teacher to be in possession of it;

A courageous endurance of personal injustice, A brave declaration of principles,

A valiant defence of those who are unjustly attacked, And a constant eye to the ideal of human progression, And perfection which the secret science depicts—

To the Temple of Divine Wisdom.

There is a road, steep and thorny, beset with perils of every kind,
but yet a road, and it leads to the very heart of the Universe:
I can tell you how to find those who will show you the secret gateway that opens inward only,
and closes fast behind the neophyte for evermore.
There is no danger that dauntless courage cannot conquer;
there is no trial that spotless purity cannot pass through;
there is no difficulty that strong intellect cannot surmount.

For those who win onwards there is a reward past all telling - the power to bless and save humanity;
for those who fail, there are other lives in which success may come.

Do not be afraid of your difficulties. Do not wish you could be in other circumstances than you are. For when you have made the best of an adversity, it becomes the stepping stone to a splendid opportunity.

Whatever plane our consciousness may be acting in, both we and the things belonging to that plane are, for the time being, our only realities. As we rise in the scale of development we perceive that during the stages through which we have passed we mistook shadows for realities, and the upward progress of the Ego is a series of progressive awakenings, each advance bringing with it the idea that now, at last, we have reached "reality"; but only when we shall have reached the absolute Consciousness, and blended our own with it, shall we be free from the delusions produced by Maya [illusion].

It is an occult law moreover, that no man can rise superior to his individual failings without lifting, be it ever so little, the whole body of which he is an integral part. In the same way no one can sin, nor suffer the effects of sin, alone. In reality, there is no such thing as 'separateness' and the nearest approach to that selfish state which the laws of life permit is in the intent or motive.

Theosophy is who Theosophy does, not thinks, not studies, not feels but does.

The Universe is worked and guided from within outwards.

A Hindu is a born mystic, and the luxuriant nature of his country has made him a zealous pantheist
The Caves and Jungles of Hindostan

Inaction in a deed of mercy becomes an action in a deadly sin.
The Voice of the Silence: Being Extracts from The Book of the Golden Precepts

Before the soul can see, the Harmony within must be attained, and fleshly eyes be rendered blind to all illusion.
The Voice of the Silence

No man can swim unless he enters deep water.
Studies in Occultism; A Series of Reprints from the Writings of H. P. Blavatsky No. 1: Practical Occultism-Occultism versus the Occult Arts-The Blessings of Publicity

The end of man is an action and not a thought, though it were the noblest
Key To Theosophy 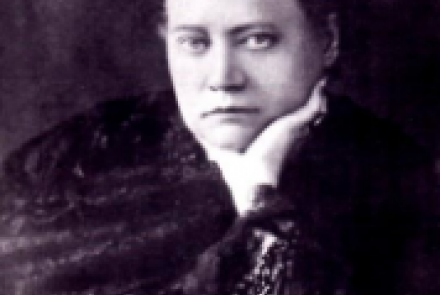